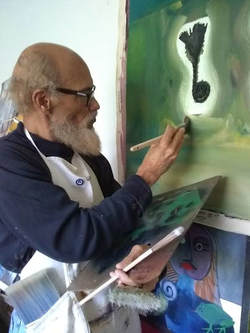 ​
"The paintings of Luis Croasdaile are visually and intellectually challenging," said Former Secretary of State of Florida, Kurt S. Browning. "Croasdaile's work is a great example of how artists provide different points of view --- a valuable contribution as we search for new solutions to the pressing issues of the day."

Artist Luis E. Croasdaile lost his hearing at a very young age and was recently diagnosed with Usher's Syndrome.  Despite his early  challenges he managed to study art in Barcelona, Spain, where he discovered his talent and interest in the arts. After immigrating to the United States he continued to build his artistic skills. At the age of 42 with the birth of his only child, Luis found a constant source of inspiration.  Luis' primary medium for painting is oil on canvas, but he is equally talented in many mediums, such as pastels, crayons, color pencils and other mixed media.  It was not until 1998 that Luis began to publically display his artwork.  In his paintings he takes ordinary scenes and people and throws them into a cubist, abstract world.  He believes that only through a skewed perspective will truth be revealed.
​" We must look beyond the surface and constantly questioned our reality, and our motives. Also, I think it is time for a cubist revival. I would like to spur some interest in this seemingly forgotten movement."
--Luis E. Croasdaile